We are 5 days into the Salon and our directors are rehearsing at spaces all over the city!  Not only do we have 7 directors and 10 actors rehearsing 7 short plays, but 3 director-driven projects helmed by Katherine Brook (Transcripts), Kareem Fahmy (The In–Between), and Shana Solomon (Si Nos Dejan: If They Let Us).  What does “director-driven” mean?  We are interviewing all three directors about their processes to find out their definitions of “director-driven.”  Make sure to check out their works-in-progresses on Saturday, June 22nd at 7:30pm and keep reading for a Q&A with Kareem Fahmy about his piece, The In-Between.

END_OF_DOCUMENT_TOKEN_TO_BE_REPLACED 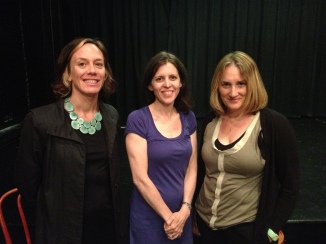 Panelists Jennifer Cook (The Field), Ellen Rusconi (SDCF), and Susan Bernfield (New Georges), along with Working Theater’s Producing Artistic Director Mark Plesent, shared their insights with us on a number of topics – networking, self-producing, resources for emerging artists, the director/artistic director relationship, and how make an application stand out.  Thank you so much to our panelists for being a part of the 4th Annual Working Theater Directors Salon and leading such an engaging conversation! 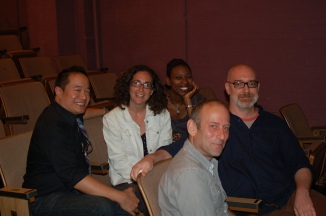 Last night was a success!  Thanks to the abundance of Directors Salon supporters past and present who came to drink, party, and network with us!  Check out the photos from last night (thanks to 2012 Salon Playwright Tim J. Lord for playing photographer!) and make sure to come back to the Salon – we have a Directors Q&A Panel tonight, an Artistic Director and Industry Leader Panel tomorrow night, and performances this weekend!

END_OF_DOCUMENT_TOKEN_TO_BE_REPLACED

The 4th Annual Working Theater Directors Salon kicks off TONIGHT!  Join us at our opening night party tonight (at which you can actually put your name in a hat and be directing something that goes up on Sunday!),  attend panels with directors and artistic directors on Tuesday and Wednesday, and enjoy our final performances on Saturday and Sunday – please stop by the June Havoc Theatre this week and and take advantage of the free opportunities we offer for emerging NYC directors!

Tomorrow night is our Directors Q&A Panel at which professional NYC directors Nelson Eusebio, Ken Rus Schmoll, Daniella Topol, and Tamilla Woodard will be sharing how they built their careers as well as answering any questions you may have about the directing world.  Below, Directors Q&A Panelist Ken Rus Schmoll (co-chair of the Soho Rep Writer/Director Lab, another great group for emerging directors and playwrights!) shares his creative habits and what excites him about new work. END_OF_DOCUMENT_TOKEN_TO_BE_REPLACED

Happy Friday-before-the-Salon!  We kick off this Monday, June 17th at our opening night party and couldn’t be more stoked to pick 7 lucky directors out of a hat!  What?  You pick directors out of a hat?  Yes.  Yes we do.  All you have to do is show up, make sure you have some relatively flexible availability (5-6 hours of rehearsal and Sunday’s tech/performance) between Wednesday, June 19th and Sunday, June 23rd, and throw your name in a hat.  What happens if my name is drawn?  You get to direct one of 7 short plays inspired by Clifford Odets’s Waiting for Lefty, written by Keith Josef Adkins, Chad Beckim, Mike Lew, Halley Feiffer, Cándido Tirado, Mfoniso Udofia, and Alladin Ullah and featuring an incredible ensemble of actors.  Really?  Really.

Keith Josef Adkins (whose work is featured tonight in Blind Fear: An Evening of Short Audio Plays at The Greene Space, performed by The Bats) tells us how Waiting for Lefty is a play that really hits close to home for him and how the playwright/director relationship is like dating.

END_OF_DOCUMENT_TOKEN_TO_BE_REPLACED

We’re so excited to have Mike Lew as one of our Directors Salon playwrights this year.  He’s currently blowing up the blog-o-sphere with his thoughts on issues such as gender parity in the theater, casting actors of color, and interning at NYC theater companies (and Mike is married to the awesome playwright Rehana Lew Mirza, who wrote the hilarious short play “The Waiting Game” for the 2012 Salon, directed by Daniela Thome!).

Mike’s short play “Ten Page Manifesto” will be performed on the final night of the Salon (Sunday, June 23rd at 7:30pm), so make sure to check out the show, OR come to the opening night party on Monday, June 17th at 7pm for a chance to direct it yourself!  Keep reading for a Q&A with Mike about his play in the Salon as well as his thoughts on the playwright/director relationship (and how to even go about forming one).

END_OF_DOCUMENT_TOKEN_TO_BE_REPLACED

As we stated in our HowlRound blog post that was published yesterday (!), the Salon’s night of Director-Driven work is one of our most difficult events to curate as we not only choose projects that we feel are exciting in terms of content and style, but to work together as an evening and truly benefit from the resources we offer.  This year’s Director-Driven directors are Katherine Brook (Transcripts), Kareem Fahmy (The In–Between), and Shana Solomon (Untitled Immigration Project).  Make sure to check out their works-in-progresses on Saturday, June 22nd at 7:30pm and keep reading for a Q&A with Katherine about her piece, Transcripts.

END_OF_DOCUMENT_TOKEN_TO_BE_REPLACED

Today, we’re bringing you a Q&A with one of this year’s Directors Salon panelists, Nelson Eusebio (make sure to check out the short play he directed by Clare Barron, Solar Plexus, in Series C of Ensemble Studio Theatre’s 34th Marathon of One-Act Plays!).  Additional panelists who will be speaking on Tuesday, June 18th’s Directors Panel include Ken Russ Schmoll, Daniella Topol, and Tamilla Woodard – stay tuned for Q&As with the rest of the panelists about how they got where they are today and their advice for emerging NYC directors.

END_OF_DOCUMENT_TOKEN_TO_BE_REPLACED

Welcome to the first Q&A of the 2013 Directors Salon Season!

Each year we strive to bring in a group of NYC-based playwrights to the Directors Salon whose work is both exciting and timely.  They write short plays based on a prompt, and at the Salon’s opening night kick-off party, any director can drop their name in a basket for the chance to direct one of them.  The directors are then given rehearsal space and a pre-cast ensemble of actors to work with, and the plays are performed before an always sold-out crowd on the final night of the Salon.

This year’s playwrights are Keith Josef Adkins, Chad Beckim, Michael Lew, Halley Feiffer, Cándido Tirado, Mfoniso Udofia, and Alladin Ullah.  The 2013 Directors Salon prompt is inspired by our 2011 Salon in which the chosen directors each received a scene from Clifford Odets’ Waiting for Lefty, and the final event was the play in its entirety with each scene directed by a different director.  This year, we wanted to see how our playwrights responded to Waiting for Lefty, a play that’s still relevant today with strong themes that not only explore the labor movement but also relationships, religion, and discrimination.

Check out our Q&A with playwright Chad Beckim to see how Lefty inspired his short play “McRib” and his thoughts on the playwright/director relationship.