We are 5 days into the Salon and our directors are rehearsing at spaces all over the city!  Not only do we have 7 directors and 10 actors rehearsing 7 short plays, but 3 director-driven projects helmed by Katherine Brook (Transcripts), Kareem Fahmy (The In–Between), and Shana Solomon (Si Nos Dejan: If They Let Us).  What does “director-driven” mean?  We are interviewing all three directors about their processes to find out their definitions of “director-driven.”  Make sure to check out their works-in-progresses on Saturday, June 22nd at 7:30pm and keep reading for a Q&A with Kareem Fahmy about his piece, The In-Between. 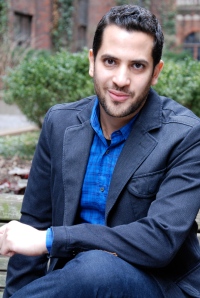 2013 Salon director Kareem Fahmy, whose excerpt of “The In-Between” will be performed on Saturday, June 22nd at 7:30pm as part of our Night of Director-Driven Work.

Working Theater: Tell us about your project in the Salon.

Kareem Fahmy: My project, The In-Between, is a new play that was inspired by the mythology of the Middle East. Originally devised as part of Noor Theatre’s MYTH PROJECT, the play examines the Western (mis)conception of the Arab temperament and attempts to answer the question “What drives us to do bad things?” It is a genre-bending event that combines a suspense thriller, a mystery, a horror story, a mythological drama, a multi-faceted love story, and a political discussion about West/Mid-East relations. The play introduces us to Nabil, a young Egyptian who has left Cairo in the wake of the Arab Spring and comes to New York to stay with his cousin Fatima, a successful banker. Nabil has done something as part of the uprising – something he is not being honest about – and the revelation of his secrets will irrevocably transform the lives of Fatima, her roommate Parker, and his devoted boyfriend Benjamin.

WT: How do you define “director-driven work”?

KF: The culture of American theatre tends to focus on the contribution of the playwright, with the director acting as the conduit for the writer’s voice. Director-Driven work puts the director in the center of the event, giving them the opportunity to create their specific creative vision. The work of Mnouchkine, Lepage, Van Hove is some of what I think of as the best director-driven work in the world – vast in scope, audacious in its presentation, and deeply human. Director-driven work can consist of reinterpretations of classics or the creation of new material. In the case of The In-Between, I began my creative process focused on the mythological notion of the “djinn” – a spiritual being described in the Qua’ran, and used that for inspiration for a story set in contemporary culture.

WT: Tell us about the rehearsal process and how the piece has progressed.

KF: The piece began taking shape in early 2013 and I crafted an outline of a story which I then workshopped with actors. A number of excellent actor-devisers helped shape certain sequences and story lines over a period of time. In May of 2013 I did an intensive week-long workshop which culminated in a 30-minute presentation of the piece. My goal moving forward from that presentation was to expand the 30-minute version of the play to a full-length (90 min) version. For the Directors Salon, I have crafted revised versions of some of the play’s early scenes, and added some new scenes. I also introduced a new character that was not present in the first version of the story.

WT: How do you see the project further developing?

KF: Noor Theatre has committed to developing the play further. My goal is to spend the next several months continuing to expand the play into a full-length so that in early 2014 we can go back into workshop with Noor to develop the play with actors. I hope to be ready for a full production by the latter part of 2014.

WT: What other projects have you created as a lead artist would you like to tell us about?

KF: I have been committed to the development of new work for the past several years. As an Emerging Artist of Color Fellow at New York Theatre Workshop I developed the play This Time, a retelling of the story of my grandmother who left Egypt in the 60s because she was having an affair with a Canadian professor. Also at NYTW I developed the new play Couriers and Contrabands, a thriller about spies set during the American Civil War. I’ve created adaptations of classics including a Sopranos-inspired Moliere piece called Don Juan Does New Jersey, and an exploration of the four major plays of Chekhov called C4: The Chekhov Project.

WT: Director-driven work often involves elements of self-production.  What resources do you know of that could aid an emerging director who is interested in creating/producing their own work?

KF: The biggest resource in director-driven work is having a network of other theater artists that you can rely on to be your collaborators. A director can never stand alone; it’s always about building a team of passionate artists that believe in you and the work you’re doing.

Kareem Fahmy will be joining fellow directors Katherine Brook and Shana Solomon in presenting 20-minute excerpts of their works-in-progresses in our Night of Director-Driven Work on Saturday, June 22nd at 7:30pm at the June Havoc Theatre at the Abingdon Theatre Arts Complex (312 W. 36thSt., 1st Floor).  The event is FREE with a suggested donation either online or at the door.  Click here to RSVP as our performance nights fill up quickly!

For more information about the Night of Director-Driven Work and the 4th Annual Working Theater Directors Salon, visit our website or check us out on Facebook, and feel free to e-mailwtdirectors@gmail.com with any questions.